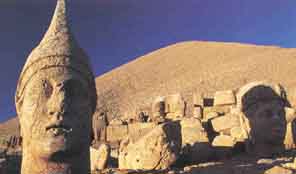 Nemrut Dag (Mt Nemrud) is a mountain measuring 2,150meters in height. It is located near the village of Karadut in Kahta county in the province of Adiyaman.   Kings of the Kommagene dynasty from 80 B.C. to 72 A.D ruled Adiyaman and its vicinity.  This kingdom, whose capital was Samosata (now called Samsat), was founded around 80 B.C. by Mithridates 1, father of Antiochos 1. The kingdom's independence came to an end with its defeat by Roman legions in the last of the Kommagene wars and it became part of the Roman province of Syria. At its height, Kommagene extended from the Toros (Taurus) mountains on the north to the Firat (Euphrates) river on the east and southeast, to present-day Gaziantep on the south, and to the county of Pazarcik in Kahramanmaras on the west.The magnificent ruins on the summit of Mt Nemrud are not those of an inhabited site however. They are instead the famous tumulus (burial mound) and hierotheseion (a word that is derived from Greek and refers to the sacred burial precinct of 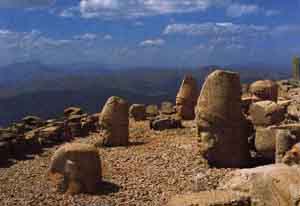 the royal family, and whose use is known only in Kommagene) of King Antiochos I of Kommagene, who ruled from 69 to 36 B.C. In a cult inscription, King Antiochos declares that he had the site built for the ages and generations that were to follow him "as a debt of thanks to the gods and to his deified ancestors for their manifest assistance". The king also declares that his aim was to provide for the people an "ex- ample of the piety that the gods commanded be shown towards the gods and towards ancestors.  "Professor K. Dorner has traced the genealogy of Antiochos 1, who was himself born of a Persian father and a Seleucid-Macedonian mother. His findings indicate that Antiochos I of Commagene claimed descent, through his father Mithridates, from Dareios (Darius) 1 (522-486 B.C.) and, through his mother Laodike, from Alexander the Great (356-323 B.C.)   Mt Nemrud is located 100 kms from Adiyaman. No reference is made to it in ancient sources. Karl Sester, a German road engineer, rediscovered it in modern times in 1881. An expedition to Mt Nemrud was organized in 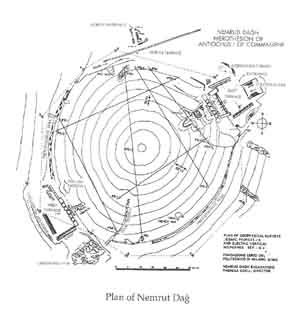 1882-83 by Karl Humann and Otto Puchstein, who published their findings in a book entitled Reisen in Kleinasien und Nordsyrien (Berlin 1890). Osman Hamdi Bey and Osgan Effendi also investigated the site in 1883 and their findings were published in a book entitled Le Tumulus de Nemroud Dagh (Istanbul 1883). F. Karl Dorner and Rudolf Naumann mounted an expedition to Mt Nemrud in 1938. Dorner returned to the site after 1951 and began working there with the US  researcher Teresa Goell. In 1984, a Turkish-German team led by Professor Dorner successfully carried out restoration work at the site.  Excavation and restoration work has been continuing since 1989 under the direction of Sencer Sahin.  In 1989, Nemrut Dag and its environs were declared a national park.  The tumulus on the summit of Mt Nemrud measures 50 meters high and covers an area 150 meters in diameter. It is formed from stones the size of a fist and is bounded on the east, west, and north by terraced courts carved out of the native rock. The eastern court was the center of the sacred precinct and is the most important group of sculptural and architectural works. It is surrounded on the west by colossal statues, on the east by a fire altar in the shape of a stepped pyramid, and on the north and south by low walls of orthostats (upright stone slabs) standing on a long, narrow base.

The orthostats overlooking the court on the north were deco- rated with reliefs depicting the Persian ancestors of Antiochos while those on the south had reliefs depicting his Macedonian forbears. At the head of the list of deified ancestors there are two eminent names: 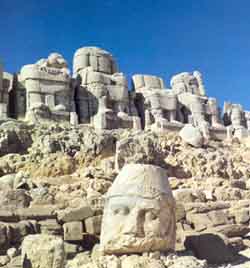 that of Dareios 1, the founder of the Achaemenid dynasty on his father's side, and of Alexander the Great on his mother's.   The names of the persons depicted in the reliefs on the fronts of the orthostats were carved on the rear faces. In front of each relief there was an altar on which sacrifices could be performed.The well-preserved colossal statues overlooking the court on the east are made of blocks of limestone and measure eight to ten meters in height. The figures are shown in a sitting position. Inscriptions identify the statues (whose names are given in Greek and Persian on account of the syncretic amalgamation of the Greek and Persian religions) on the eastern terrace from left to right in the following order: Antiochos, the goddess Kommagene, Zeus-Oromasdes (the Graeco-Persian sky-god and supreme deity, and also the largest-sized statue), Apollo-Mithras, and Herakles-Artagnes. On either side of the divinities stood a guardian eagle and lion. The heads of all the deities have toppled over onto ground in the intervening centuries. Their finely worked facial features are striking examples of the idealized late Hellenistic style. The gods wear Persian headgear. The necks of Antiochos and the other gods are protected by lappets in the Persian fashion. The head of the goddess Kommagene is decorated with a crown of fruit. The sides of the pedestals overlooking the court and the tumulus are inscribed with the country's laws and commandments as 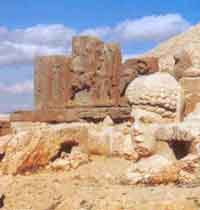 well as with the king's birthday and de- tails of cult procedures, all written in the Greek script.  The colossal statues on the western terrace are arranged in the same way as those on the east. Their heads also lie about on the ground but are better preserved. The statues were re-erected in their places in the course of work carried out in 1985 under the direction of F. K. D6rner. Owing to the different topographical features between the east and west terraces, the orthostats bearing the inscriptions and reliefs of the ancestors on the latter are arranged differently from those on the former.

The slabs with the reliefs of the king's Persian ancestors are set along the southern edge of the western terrace while those of his Macedonian forbears are arranged opposite the monumental statues. In the western terrace, the reliefs showing Antiochos shaking hands with different divinities are very well preserved; of the slabs that depicted the same scenes on the east terrace, only a few fragments remain. The handshaking scenes that are to be seen on the west are as follows: Antiochos and the goddess Kommagene; Antiochos and Apollo-Mithras; Antiochos and Zeus-Oromasdes; Antiochos and Herakles-Artagnes.  The relief of the lion in the west court is of particular interest. The stone slab measures 1.75 meters in height and is 2.40 meters long. It shows a powerful lion walking to the right. Its body is 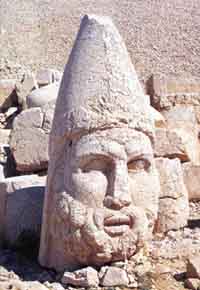 decorated with nineteen stars and there is a crescent moon on the breast. From the three larger stars on the lion's back, sixteen rays emerge as opposed to the smaller stars, which have only eight rays each. These three larger stars are identified in writing as Jupiter, Mercury, and Mars. What we see here is a picture of the world's oldest horoscope. It was originally supposed that the horoscope referred to Antiochos’s birthdate but Professor Otto Neugebauer identifies it as the seventh of July in the year 62 or 61 B.C. This corresponds to the date on which Antiochos I was installed on the throne by the Roman general Pompey. According to Professor Dorner on the other hand, the event being represented is the establishment of the Nemrut Dag, monument.  The north terrace took the form of a processional way that connected the terraces on the east and west. The colossal statues of an eagle on either side guard the entrance through the exact center of the wall forming the north terrace.  According to inscriptions on the backs of the thrones on which the divinities are seated, King Antiochos 1 of Kommagene ordered that he be buried in this hierothseion. The excavations that have been carried out here have revealed that the tumulus was heaped up atop rocky hill. This makes it very likely that the king's bones (or ashes) were placed in a chamber cut into the rock an that the chamber was then covered over with the tumulus. Despite efforts however, the burial chamber itself has not yet been reached.