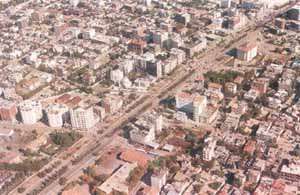 Turkey is divided into provinces, an administrative system barrowed from France. There are 81 provinces (il) in Turkey. Each province is then subdivided into smaller administrative units called ilçe (district), roughly equivalent to a county in the U.S. Provinces are usually named after the biggest city in that province. The two other large subdivisions are also named for the biggest settlements in that division. Adıyaman is not only the largest city in that province, it is also that province’s “central” district (ilçe). Each İlçe is subdivided into Bucak (like a township) and each bucak is further divided into villages (köy). Adıyaman has 9 districts (including the central one) and 12 bucaks (townships). All three major subdivisions of a province are governed by a centrally appointed administrator.  Vali (governor) administers the province, kaymakam the districts (ilçe), and nahiye müdürü oversees the bucak. The governor (vali) also acts as the administrative head of the central district. Each major settlement in a province also elects a mayor, called belediye reisi. The mayors of these settlements deal only with the physical infrastructure of the cities while the government appointed civil servants are in charge of the courts, security and other central functions like census bureaus, public health, and public education. Following is a brief summary of the major political divisions of Adıyaman, starting with the central city.

Central District (The city of Adıyaman): According to 1990 census the population of the central district of the province was 170,75 including bucaks and villages. However due to recent migration, mostly caused by the displaced villagers due to the Atatürk dam (part of Southeastern Anatolian project, called GAP), the population is estimated to be over 200,000. GAP has accelerated the economic activity of the city, especially in light industry.  Adıyaman rapidly developed after becoming a province in 1954. Although it is now a fairly modern city, the major activity in the central district still remains to be farming and animal husbandry. Atatürk dam, 25 miles from the central city, combined with the deep historical roots of the region has made tourism an important activity for the city. Pirin caves and rock tombs are important historical sites in the central region.

Formerly HÜSNÜMANSUR, Arabic HISN MANSUR, city located in a valley of southeastern Turkey. Founded in the 8th century by the Umayyad Arabs near the site of ancient Perre, Hisn Mansur was later fortified by Caliph

Harun ar-Rashid and became the chief town of the area, replacing Perre. Ruled successively by the Byzantines, Seljuq Turks, and the Turkmen Dulkadir dynasty after the Arabs, it was incorporated into the Ottoman Empire near the end of the 14th century. Under the Turkish republic, it was renamed Adiyaman in 1926. The ruins of Perre are just to the north. The city is a local market for the agricultural products of the area.

The region around Adiyaman contains mountains and plateaus drained by the Euphrates River and its tributaries.  Products include cereals, cotton, tobacco, pistachio nuts, and grapes. Pop. (1990) 100,045.

Adiyaman is one of the oldest settlements in history, dating back to 40 th century B.C.  Historical findings indicate that between 7.000 and 3000 B.C. Paleolithic, Neolithic and Chalcolithic Ages reigned in the area. It has been the host of many civilizations, including Hittite, Persian Kommagene, Roman and Byzantine. Founded at its present place, in thie 7 th century by the Ummayyads, Adiyaman later housed several empires and states, including Anatolian Seljuks and finally the Ottomans.  In the republican era, Adiyaman had been a district of Malatya province until 1954. At that time it was given the status of province.

Situated in Southeastern Turkey, Adiyaman Province is flanked by the provinces of Diyarbakir (to the East), Malatya (to the North), Kahramanmaras; (to the West), Sanlizurfa anda Gaziantep (to the South). Eight districts are attached to Adiyaman. The land is rough and uneven, lowering from north to south. Along with the famous Euphrates, there are other rivers and creeks flowing in and out of the province. A sizeable part of the province's land, with its people and settlements, bordering Euphrates, were left to the artificial lake of the Ataturk Dam.  The overall population of Adiyaman is 5690.386, according to the 1997 Census. The city center houses more than 213.596 inhabitants.

There are air, rail and overland routes to Adiyaman. Golbasi district is the primary junction, on the main highway to

Malatya, Kahramanmaras and Gaziantep. Rail connections are also made in Golbasi, through which Malatya - Adana railroad passes.  The Airport has opened in our city There have been flights from Adiyaman to Istanbul via Ankara three times a  week (Monday. Wednesday and Saturday)

Adiyaman has been the host of many civilizations throughout its history.  Being a melting pot socially and culturally, it has  valuable features related to customs about different periods of life, hospitality, folk dancing, carpets and kilims etc.  Adiyaman is famous for its folk songs, folk dances and tombs (turbe).  Different kinds of meatballs, such as "cigkofte, icli kofte, mercimekli kofte" and hitap (stuffed hot pie) are special local foods in Adiyaman.

Go to the Regions