Historically SINOPE, seaport on the southern coast of the Black Sea, northern Turkey. It lies on an isthmus linking the Boztepe Peninsula to the mainland and is shut off from the Anatolian Plateau to the south by high, forest-clad mountains. Because it has the only safe natural roadstead on the north coast of Asia Minor, Sinope was in antiquity the foremost port on the coast, with its land approaches barred by a huge citadel (now in ruins) and its sea side defended by a strong wall. Its decline was associated with its lack of easy access to the interior and its rivalry with Inebolu on the west and with Samsun on the east; the latter has emerged as the largest Turkish port on the Black Sea.

According to legend, Sinope was founded by the Amazons, who named it after their queen,

Sinova. The city's ancient inhabitants ascribed its foundation to Autolycus, a companion of Hercules. Destroyed by the wandering Cimmerians, it was refounded toward the end of the 7th century BC by a colony of Milesians. It ultimately became the most flourishing Greek settlement on the Euxine (Black) Sea. As a terminus of the trade routes from Upper Mesopotamia, it commanded much of the maritime trade of the Pontic region and by the 5th century BC had established 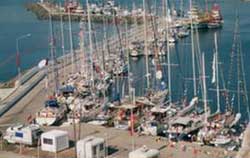 many colonies on the coast and enjoyed naval supremacy in the Black Sea. In 183 BC it was taken by Pharnaces I and became the capital of the Pontic kings. Under Mithridates VI the Great, who was born there (as was the 4th-century-BC founder of the Cynic sect, Diogenes), it enjoyed a high degree of prosperity and was embellished with fine buildings, naval arsenals, and well-built harbours. The Roman Lucius Licinius Lucullus captured the seaport in 70 BC, and the city was nearly destroyed by fire.

Taken by the Seljuq Turks from the Comneni of Trebizond (modern Trabzon) in AD 1214, it was incorporated into the Ottoman Empire in 1458. In November 1853, shortly after the outbreak of the Crimean War, the Russian navy dramatically 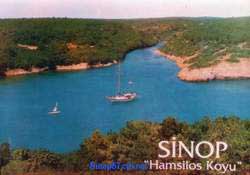 attacked Sinop, destroying the Ottoman fleet and reducing large parts of the city to ashes.

Sinop's extant monuments include a ruined ancient citadel rebuilt during Byzantine and Seljuq periods, some isolated columns and inscribed stones built into the old walls and dating from the early Greek and Roman periods, and the Alâeddin Cami (a mosque), built in 1214. A 13th-century Alâiye religious school now houses the local museum. Sinop is linked by road with Samsun and by sea with Istanbul. 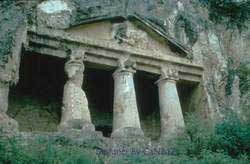 partly forested. Agriculture employs most of the labour force. Corn (maize), flax, and tobacco are grown in the valleys and on the fertile coastal strip. Pop. (1985) city, 23,148.

Sinop is the most beautiful natural harbor the Black Sea. There are many legends about the foundation of the city but the most dependable is that the Miletion colonists founded it in the 7th century BC and the city is the birthplace of the cynic philosopher Diogenes. According to another legend the province is said to have received its name from the Amazon Queen "Sinova". The town's citadel dates from that early age and the foundations of the Temple of Serapis is to be found on the grounds of the Archaeological Museum where some beautiful golden icons are displayed. The 13th century Alaeddin Mosque, the Alaiye Medresse, and the Balatlar Church 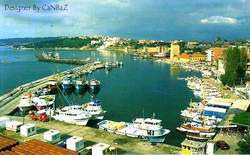 are of interest in the city. Traditional nautical wood carvings, good crystal and the original cotton clothes of the city are praiseworthy and unique, so you will want to have examples of these artifacts. The seaside hotels and holiday villages will make you stay longer and you will have the opportunity to sit in a fish restaurant by the harbor and watch the perfect combination of green and light blue while sipping your wine. Hamsilos Fjord, 11 kms from the city center is the only fjord in the country.

Gerze, situated on a peninsula, 40 kms southeast of Sinop, will provide you with fine beaches, meadows, restaurants and parks, while Camgolu provides camping facilities in a large forest sloping to the sea. At Boyabat, the largest town of the province, there are many rock tombs and a citadel.