City and port, northern Turkey, on the Black Sea. It lies at the mouth of the Melet River on the eastern slopes of Boztepe (1,800 feet [550 m]), which protects it against storms from the northwest. Ordu was the site of ancient Cotyora, founded by Greek colonists from Sinope (modern Sinop) in the 5th century BC, and is the place from which the survivors of Xenophon's Ten Thousand (Greeks who went to Asia to seek their fortunes) embarked for Sinope and Heraclea Pontica (modern Eregli). Ordu is now a centre for hazelnut processing and exporting, fishing, and timber exporting. The city is on the Samsun-Trabzon coastal road about 100 miles (160 km) west of Trabzon.

The area in which Ordu is situated is rugged, well-forested, and humid. The fertile coastal strip supports a variety of agricultural products, including corn (maize) and hazelnuts. Livestock is raised and grain is grown in the deep valleys of the interior. Pop. (1990) 102,107.

One of the lovely city where, if we return from the Babylon campain, the survivors of ‘Xenophon’s Ten Thousand’ left Anatolia from Ordu in their retreat to Grecee. Today, it is a beautiful port situated at the foot of a forested hill. In the Pasaoglu Konak (mansion), now the Ethnographical Museum, glimpse how a rich and influential 19th century family lived. In this region of Turkey’s famous Hazelnut production centers around Ordu and every September the town hosts the Golden Hazelnut Festival. Be sure to sample the delicious chocolate nut candy. It is worth spending some time at an 18th century church, 2km from town, and the pretty sandy beach of Guzelyali is worth visiting.To the south, 58 km further, at an altitude of 1,250 meters lies the Yayla (Plateau) of Cambasi offering beautiful mountain views. The Yayla of Keyfalan at 2,000 meters, is another popular summer destination for local residents.

Rize is, 75 km east of Trabzon, is built on a mountain slope and covered with tea bushes which look like puffy green 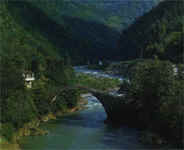 pillows. The vegetation is so dense in Rize that it is virtually impossible to see ground. The shoreline and hinterland possess myriad shades of green. Rize is famous the world over for its flora. There about 20 flowers that are unique to the Rize area. The inner regions coming right to the shoreline, with mountains and plateus, complete the picture while traditional villages and plateau houses blend in with nature to make an enriching contribution. Written history concerning the area started with sailing voyages to Rize from Miletos. In 670 B.C. Miletans extended their Black Sea colonies as far as Rize. The region was later invated by Medes and Persians and was afterwards influance by Ionian and Greek cultures.

Rize came within the Pontus Kingdom in the early centuries A.D. and was protected from the encroaching Islamic invasions until the 11th century. The area was then taken by Meliksah of the Great Seljuks. The region was added to the Byzantine Empire after the 11th Crusade and then passed to the Rum Empire of Trabzon. Be sure to see typical Black Sea city’s 16th century Islam Pasa Mosque and the remains of a Genoese Castle. From Ziraat 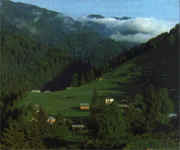 Park you can take in a splendid panorama of the whole area. A lightweight summer cloth of good quality and printed with colorful patterns comes from the Rize area. During the Summer Tea Festival you can purchase the best blend of Black Sea tea. Mehmet Mataraci Mansion, now an Ataturk Museum, displays his personal belongings as well as ethnographical artifacts from the region. Turning inland after Ardesen, on the road leading east from Rize, you comet o the beautiful little town of Camlihemsin straddling a rushing stream. Nearby is the Firtina Vadisi (Valley of Stroms) with the beautiful Zir Castle, and stone bridges from Byzantine times. After walking around Ayder’s rolling meadows, you can relax in one of the many hot springs. For those who like mountain climbing, this is the best starting point for scaling the Kackar Mountains.This emerald range is one of the best and the most challenging for climbers in Turkey. The whole of the Kackar Range constitutes the beautiful Kackar Daglarý National Park. South of Rize, on the Kackar Mountains, Anzer village offers the world-famous and healthful Anzer honey, it is a nice area for trekking and for its botany. East and west of Rize, Cayeli Ardesen, Of and Fýndýklý all enjoy a subtropical climate, lush green settings and 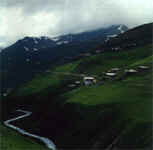 traditional chalets. The Camburnu coast is covered with golden pine trees: many species of migrating birds land here, and it is a lovely area for resting and picture taking. Hopa, an attractive town at the foot of a forested mountain, is the last port before the Turkish-Georgion border. The international boundary actuall divides the village of Sarp. 27 km northeast of the town of Borcka on the way to Artvin, there ia a wonderful alpine lake, Karagol with different pine trees one of the best for visiting the region...