Kahta: Kahta, which is 25 miles away from Adiyaman (the province capital), is the largest district (ilçe) of the province. Kahta is bounded on the east and southeast by the Euphrates River and on the northeast by Gerger; it is roughly 2,500 m above sea level.

The Southeastern Taurus Mountains make up the northern border of the area, with Mt. Yarlıca at 4,738 feet and Mt. Anka at 7,280 feet among the area’s tallest elevations. Besides the Euphrates, Kahta and Kalburcu are its significant rivers. The Ataturk Dam on theEuphrates put a significant portion of Kahta’s land under water.

Kahta occupies an archeologically significant place in the region. The fortress in old Kahta dates before the Common Era. It was a significant defensive enclave for the Arabs who captured it in the 8th century. The fortress came under the control of Selcuk Turks in 1085, Ottoman Turks in 1518. After the founding of the Turkish republic, Kahta become a part of Malatya province. In 1929 the administrative center of the district was moved to “new” Kahta.

The most significant archeological sites of the area belong to the

Kommagene Kingdom. Karakuş, a burial site just to the west of Kahta river, Arsemia (the summer capital of the kingdom) just to the east of the river are within 10 miles of Kahta. The magnificent Mt. Nemrut (declared by UNESCO as the 8th wonder of the world) is about 30 miles to the northeast of the city. The burial site of king Antiochus is 7,500 feet above sea level. The site has two terraces that contain colossal statutes of Greek and Roman gods in Persian headdress. Cendere Bridge, still functioning, on Kahta River is also a historical landmark that was left by the Romans.

The most important economic activities of the district are animal husbandry, grain farming and tourism.

Old Fortress (Arsemia):  Directly opposite the New Fortress is the historically important fortress, Old Fortress.  The Kahta stream makes the division between these two fortresses.  Here a relief showing King Mithradates and Hercules together.  A hall 158 meters below the surface can be reached by a stairway carved out of stone.  The inscription, one of the most important in Anatolia, is written in Latin telling about Arsemia the capital of the Commagene Empire, King Antiochus fortifications political goals and religious beliefs.

New Fortress: In the village of Kocahisar (old Kahta) the fortress gives the impression that is from the Middle ages but it is believed to be the site of the palace of kings of a more ancient time. The remains today is the New Fortress, The conspicuous tower, the front of the fortress and the main part are from the Memluk period. 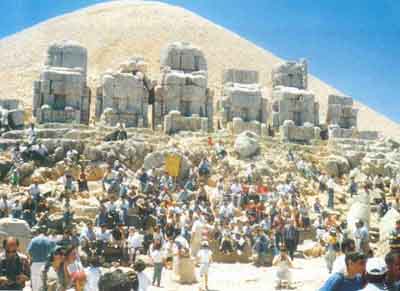 Cendere Bridge:   On the Kahta-Old Kahta road is the one and only bridge over the Kahta stream.  At the one end of the bridge there is one, and at the other end two columns.  These columns are of round dressed stone placed on top of each other and are 9-10 meters high and 2 meters across.

Derik Fortress (Derik Kale):  This fortress is north of the Cendere Bridge on the outskirts of the village of Kasgun.  Inside the fortress in front of the group of structures in an alter and holy area.

Karakus Hill:  This hill is actually a tumulus believed to be the grave site for the kings of Commagene.  It is 35 meters in height surrounded by four 9-10 meter high columns.  On one of these columns is an eagle statue from which the village also derives its name, Blackbird Village (Karakus).

Tille Tumulus:  On the Kahta-Diyarbakir road along the banks of the Euphrates River (Firat) in the village of Geldibuldu is and historical tumulus.  It goes by the name Tille and is being excavated by an English group of archeologists. 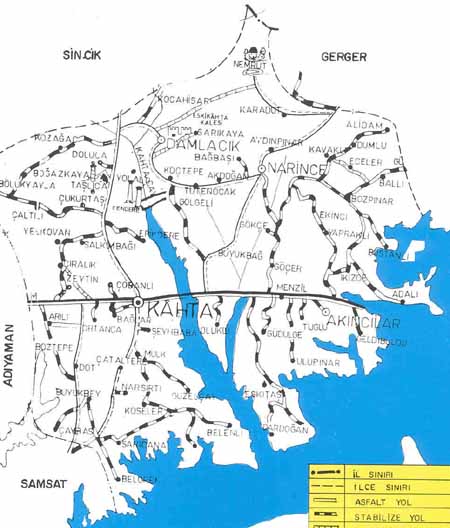