Sirkeci is an area in the Eminönü district of the city of Istanbul, Turkey. It has evolved as the place name of the area in Eminönü surrounding Sirkeci Station, the Southeastern (thus "Oriental") long distance passenger train terminus in Europe for the Orient Express.

The neighborhood consists mostly of commercial and tourist oriented uses. A combination of small shops, hans (larger workshops), offices intermingle with boutique hotels, traditional Turkish restaurants, Turkish and foreign-language bookstores, tourist offices, and of course many of the great monuments of Istanbul.

Important historical buildings in the Eminönü/Sirkeci area include Aya Sofia, the Blue Mosque, the Roman cisterns and Topkapı Palace.

Famous as the terminating point for the Orient Express, Sirkeci remains one of the main travel hubs for Istanbul, connecting suburban train, tram and ferry systems. The Sirkeci Station of the Turkish State Railways is the terminating node of the European railway network leading into Istanbul, the two main lines from Thessaloniki, Greece and Bucharest, Romania. The Marmaray project under construction, an underwater railway tunnel being built under the Bosporus connecting the European and Asian networks, will also serve this area 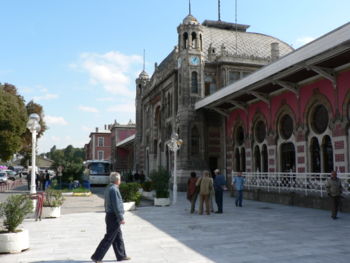 Side entrance to Sirkeci Terminal

Istanbul Sirkeci (Turkish: 'Sirkeci Garı') is a terminus main station of the Turkish State Railways (TCDD) in Sirkeci, on the European part of Istanbul, Turkey. International, domestic and regional trains running westwards depart from this station which was inaugurated as the terminus of the Orient Express.

After the Crimean War, the Ottoman authorities concluded that a railway connecting Europe with Istanbul was necessary. The first contract was signed with Labro, a British member of parliament, in January 1857. The contract was cancelled three months later because Labro was unable to provide the investment capital required. Similar second and third contracts signed with British and Belgian entrepreneurs in 1860 and 1868 ended with the same result. On April 17, 1869, the concession for the "Rumeli Railroad" was awarded to Baron Maurice de Hirsch (Moritz Freiherr Hirsch auf Gereuth), a Bavaria-born banker from Belgium. The project foresaw a route from Istanbul via Edirne, Plovdiv and Sarajevo to the shore of the Sava River. The construction of the first 15 km from Istanbul to Halkalı began on June 4, 1870 and was completed on January 4, 1871. An extension of the line to Sirkeci was demanded as the starting point since Yeşilköy was too far away from Eminönü, the main business district of that epoch. The first proposed option for the line was a route from Beyazit down to the shore of the Golden Horn. The Ottoman Sultan Abdülaziz decided and permitted the route to run on the shoreline of the Sea of Marmara bordering the walls of Topkapı Palace’s lower garden. The extension line was completed on July 21, 1872. In 1873, a "temporary" terminus station in Sirkeci was built.