Eyup is a district of the city of Istanbul, Turkey, up where the Kağıthane and Alibey streams meet at the head of the Golden Horn, Eyüp is of great historical importance, especially for Muslims, and is an attractive area to visit.History

Although this area lies outside the city walls, there was always a village here, as the two streams provided plenty of fresh water, and in the Byzantine period there was a church in the village and later a monastery (which was built on the steep hill behind today's Eyüp Mosque).

Being outside the city walls the area has long been used as a place of burial, there are Christian churches and cemeteries in the area as well as a large Muslim cemetery and the major Muslim shrine which gives the area its current name and fame:

The Mosque and türbe (funerary mausoleum) of Ayyub al-Ansari

The name Eyüp comes from Abu Ayyub al-Ansari, the companion and standard bearer of the Prophet Muhammad. He came to Constantinople with the Arab army during the first attempted Muslim conquest of the city, died and as his last request was buried there. Seven centuries later, during the conquest of Constantinople, the tomb was said to have been re-discovered by Ak Şemsettin the Sheikh of Mehmed II.

From that point on Eyüp became something of a 'sacred place', the mosque containing a stone said to bear the footrpint of the Prophet Mohhamed. More mosques, prayer schools, and fountains were built, and as many Ottoman officials wished to be buried at or near the site of Abu Ayyub's resting place, the cemetery became one of Istanbul's most desirable final resting places.

The area grew and acquired a great deal of valuable sacred architecture, becoming a place where Dervish Tekkes could be found alongside visitors both Turkish and foreign, who came from the hustle and bustle of Istanbul to the area to enjoy the cooler air and fine view.

At the height of the Ottoman Empire Eyüp was one of the three recognised urban areas outside the city walls. (The other two being Üsküdar, across the Bosphorus, and the European trading outpost of Galata, across the Golden Horn from the city. Some of the character of this period can be seen in the paintings of the city, including many of Eyüp, by Count Preziosi.

Eyüp during the industrial revolution

During the 17th and 18th centuries, Istanbul grew as the fringes of the Ottoman Empire became unsettled and Turkish communities from the Balkans and the Caucasus came to the city. During this period the Eyüp area became incorporated into the city, losing some of its spiritual air as factories were built along the Golden Horn. The first of these was the 'Feshane', the factory beside the Horn where fezzes were stitched for the Ottoman armies. (The Feshane is today an exhibition centre, owned by the Istanbul municipality).

At the same time the industry and the growing population, as well as the continuing numbers of visitors to the holy places, encouraged the growth of the shopping district around and behind the mosque; the streets behind had fish and dairy markets, shops, cafes and bars for the residents of the area, while the courtyard of the mosque itself held people selling scriptures and prayer beads for the visitors and pilgrims.

From the mid-20th century onwards, the area took on a more 'working class' feel as wealthier residents of Istanbul preferred to buy housing on the Asian side of the city or further along the Bosphorus, since the Golden Horn was becoming increasingly polluted and unpleasant due to the industrial development. The industrial zone expanded as major roads were put through the Eyüp area and the market gardens and flower fields of Alibeyköy disappeared. 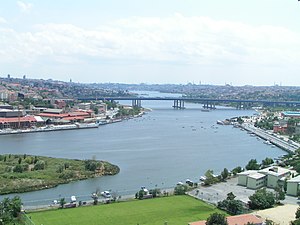 View of Golden Horn from the Pierre Loti Cafe

In recent years many of the factories have been closed or cleaned up, the Golden Horn no longer smells and it is possible to sit by the waterside. Thus the character of Eyüp is changing again. The area is now losing some, but not all, of its cosmopolitan Istanbul feel as more and more families with a conservative Islamic view of life move into the area. Forty or fifty years ago there were a fair number of pubs, gambling houses and the usual amenities of an urban population. There are few bars in Eyüp today, maybe none, although plenty of beer is sold in the corner shops and the streets are full of cafes where men will while away the hours smoking and playing cards.

The population has grown in number too with new building of apartment blocks, but the atmosphere is still peaceful, the mosques and the history still dominate and Eyüp is busy trying to emphasize its image as an area of spiritual calm and relaxation. Not only in the mosques and the cemetery, but also on the wooded hill above, where the extensive tea garden named after the French writer, Pierre Loti, has a wonderful view over the Golden Horn all the way to Eminönü and a great sense of peace, as you take your tea under the trees.

There are also more and boats on the Golden Horn now the water is cleaner; there are many small boats taxiing people on the water as well as regular ferries up the horn from Eminönü.

The Eyüp Sultan Mosque continues to draw tourists visiting İstanbul, as well as rather larger numbers of Turkish religious pilgrims. At Friday prayer and throughout Ramadan the area is full of visitors from all over the city. These are not just those with the most serious religious inclinations (although there are plenty of those) but families of all strata of society come to pray before a wedding or the circumcision of their sons.

In recent years a thriving market has grown around the mosque of bearded gentlemen selling prayer mats, beads, dates from Saudi Arabia, scented oils, and indeed all kinds of Islamic books, recordings of the Koran being recited and other artefacts. On Friday's a marching band plays Ottoman military music, mehter, giving the area around the mosque something of a carnival atmosphere with an Islamic twist. In Ramadan the area in front of the mosque is taken over by large tents where food is served to the poor at the evening breaking of the fast.

Established at time of the conquest, Eyup was Istanbul's first Ottoman Turkish settlement. The district is located beyond the city walls on the south bank of the Golden Horn and takes its name from the tomb of Eyyub al Ensari, a companion of the prophet Mohammed, who is believed to have died there during the Muslim siege of Istanbul in the 7th century.

Eyup began to develop shortly after the conquest. The first tangible sing of this were the tomb that Sultan Mehmed, the Conqueror, had built over the grave of Eyyub el-Ensari after his mentor, Aksemseddin, saw the place in a dream and beside it a mosque. The first settlers were from Bursa and the first eight neighborhoods given the names Cami-i Kebir, Kasim Cavus, Uluca Baba, Abdulvedud, Sofular, Otagcibasi, Fethi Celebi and Mehmed Bey.

The most intense period of development occurred during the Kanuni (sultan Süleyman) period in the 16th century. As well as the mosques, schools, fountains, tombs, hamam (turkish bath) and alms kitchen that suddenly appeared, a succession of mansions and pavilions began to line the shores. The Tomb of Eyup el-Ensari, commonly known as "Eyup Sultan Türbesi", has changed little over the years and occupies a central place in community life today, just as it did in the past.

Besides the ceremonies of the sultans, one of the most striking features of Ottoman times was the girding of swords at Eyup Sultan. The ceremony, which was performed to prayers, had a religious - spiritual quality and served to recall the significance of the new sultan's standing. However, the tradition probably dates from before the conquest. The power of the head priest at the Leon Makelos monastery which was sited here in the Byzantine period, included girding the emperor, military commander and nobles as they left for ward and consecrating the swords.

Another peculiarity that Eyup Sultan Türbesi brought to the settlement was that many Ottomans wished to be buried there in order to be close to the saint who lay entombed. The result was that a number of large cemeteries sprang up, which give the district its mystic quality. Eyup craftsmanship of the tombstones and the catalogue of inscriptions they bear are famous and good examples of the stone-carving art. At the same time, the cypress trees looming from among the graves seem to highlight the co-existence of life and death.

As well as the average man on the street, a large number of prominent public figures have chosen Eyup as their final resting place during both the Ottoman period and the days of the Republic.

Eyup Sultan Türbesi, which is perhaps one of the most celebrated sites of Eyup, draws vast crowds on religious feast days and public holidays. It is also place of pilgrimage for newly-weds and circumcision parties. But Eyup was also famed for a host of other things: The fishermen who sell their bountiful catch from the Golden Horn, its florists and dairies, shoreline cafes, toy tambourines, drums and whistles; the toy makers of Eyup would have been kept busy under the spiritual leadership of Eyup Sultan, who is believed to have adored children.

However, the advent of the industrial age at the end of the 19th century and rapid spread of shanty towns after the 1960's has more or less destroyed the traditional character of the district.