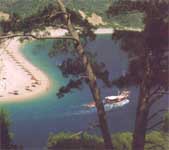 Town, southwestern Turkey. It lies along a sheltered bay in the eastern part of the Gulf of Fethiye on the Mediterranean Sea that is backed by the western Taurus ranges. Fethiye's enlarged port is an outlet for the minerals and timber of the region. The hinterland is a major center of chromium mining. Fethiye stands on the site of the ancient Lycian city of Telmessus, whose remains include spectacular rock tombs and sarcophagi dating from the 5th-4th century BC. Other landmarks include a ruined Byzantine fortress on the summit of a nearby hill. Much of the town is new, having been rebuilt after a disastrous earthquake in 1958. Picturesquely situated with several Lycian sites nearby, notably Xanthus, Fethiye is a growing tourist center linked by sea with Izmir and Istanbul. Pop. (1990 prelim.) 25,690

Fethiye is a pretty town at the hillsides of the Mount Mendos, the part of the Tourus Mountain chains, and surrounds the bay that it has given its name to. The high mountain range formed by rises and falls of the crust during the  Tertiary Geological Period, and hundreds of bays lying at the mountainside seem to embrace each other along the Fethiye shore line. This mountain range (it was

called the Kragos and Antikragos in the antique period) with an altitude of more than 6560 feet (2000m.) forms the southwest end of the Toros (Taurus) chain and lies parallel to the shore without a single passage to the inner regions. On a warm and sunny winter day, peculiar to the Mediterranean climate while you are sipping at your Turkish tea or Turkish coffee, at one of the local tea gardens, along the coast, these mountains with pine trees at their skirts, white snow and mist on their summits will once more welcome you to heaven. Dry, long, hot summers and short, warm, rainy winters are climatic characteristics of Fethiye . The temperature which is around 86-105 F (30-40 C) during the summer, is usually above 50 F (10 C) in the winter. Considering the fact that in these turquoise-colored seas that in no season falls below 60 F (16 C)  swimming is possible for nine months of the year, we might as well conclude that there are only two seasons in Fethiye : Spring and Summer!

Due to the prevailing climatic conditions in the region, pine forests consisting of silver fir, Scotch fir, and Norway spruce cover the place. Olive, laurel, myrtle, acacia, plane tree, and popular trees are some other types that you can find in this rich flora. the frankincense tree (Liquidamber Orientalis) which is the source of myrrh widely used in the pharmaceutical and cosmetics industries, is among the rare species in the world. This plant has survived for 10 million years and has remained in existence since before the ice ages is cultivated only around Fethiye and Koycegiz and in a small district of

California. You may reach this natural and historical heaven that God has donated to nature by any of one of the land, air, or sea courses that you chose. You could have a comfortable journey to Fethiye by the three highways through the pine forests, with connections to Mugla, Antalya and Burdur. Scheduled bus trips in all three directions provide the link between Fethiye and other  cities. The nearest center for air travel is the Dalaman Airport 31 miles (50 kms.) to Fethiye. In addition to the year round Istanbul - Izmir - Ankara and Antalya connected flights of Turkish Airlines, there are direct flights to all major cities in Europe, Asia and America. During the touristic season, Fethiye's having the fourth largest seaport after Iskenderun, Mersin and Antalya provides great ease of marine travel. The naturally protected harbor is a drop-by place for all yacht crews.

Cyaneae is a Greek name meaning "dark blue". It is not known why the city was given this name. It is certain however, that this was one of Lycia's important cities, given it strategic location and its large settlement area. Although it is listed by almost all the ancient geographers, they give no information at all about it. What little knowledge we have comes from a few inscriptions. One of these concerns a wealthy citizen ofs Cyaneae named Jason. During the reign of Emperor Antoninus Pius (138-161 A.D.) Jason is found donating money to the region's cities and receiving the title of Lyciarches, or chairman of the Lycian League.

The city, situated atop a steep hill rising to the north of today's village of Yavu, is enclosed on three sides by fortification

walls. Only on the south, where natural barriers make access difficult, did the residents not feel the need for fortifications. These walls, which for the most part date to later periods, are of poor construction, employing re-used materials gathered from here and there. Three standing gates on the north and west walls gave entrance to the city.

Hidden among trees and brush on a hill that can be called the acropolis, are structural remains. A Roman bath, consisting of compartments whose function is not yet known, can be seen in the south-west section of the hill. A little further on ıs a splendid fourth century B.C. sarcophagus, still partially buried, with a relief-carved lid a body inscribed in Lycian.

Cyaneae's best preserved structure is its second century A.D. theatre on the west of the acropolis. Set in a natural slope, the cave, which rises on small polygonal blocks, numbers eleven tiers of seats, and probably held wooden supports for awnings unfurled to protect the spectators from the sun. The stage is in such a poor state of preservation that it yields no clue as to its construction.

On the path between the theatre and the acropolis is the necropolis area containing hundreds of sarcophagi. Here one feels one has returned to an ancient era. Almost all of the sarcophagi which exist here, and a variety of forms not seen elsewhere in Lycia, are Roman in character.

Rock-cut tombs of early date are located on difficult to reach cliffs on the southern face of the hill. A tomb resembling a simple lonic temple is especially interesting. According to the Greek inscription on its door, the actual sarcophagus belonged to one Perpenesis and his wife, while the remainder of the tomb was divided among their relatives. The inscription also states that the tomb was not to be opened without the consent of the mindis, apparently an official organization that protected the tombs from vandalism and robbery. The tomb has been dated to the third century B.C.