Edirne is a gateway of Turkey opening to western world, the first stopover for newcomers from Europe. Situated on the Greek border, this beautiful city is famed for its many mosques, the elegant domes and minarets which dominate the panoramic 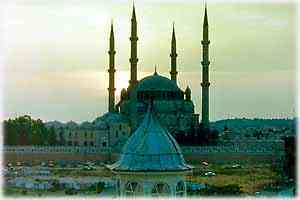 appearance of the province.

One of the most important monuments in this ancient province is the Selimiye Mosque, built in the 16th-century by the greatest Turkey's greatest architect, Mimar Sinan. Carrying the name of the then reigning the Sultan, this mosque magnificently represents Turkish marble handicrafts and it is covered with valuable tiles and fine paintings. The Yildirim Mosque and the Eski Mosque, dating back to the 14th and 15th centuries respectively, are other spectacular sights while the Muradiye Mosque and the Üç Serefeli Mosque are also among the oldest and most impressive buildings. Last to be mentioned is the Beyazit II Mosque, a great monument with its complex construction comprising many facilities used in those times.

Besides the fascinating mosques, there are different sites to be visited in Edirne, all reflecting its rich past. There are attractive palaces, the most prominent one being the Edirne Palace, which was the "Palace of the Empire" built during the reign of Murat II. There are the amazing caravansaries, like the Rustem Pasha and Ekmekcioglu Ahmet Pasha caravansaries, which were designed to host travelers, in the 16th century.

The lively bazaars of "Bedesten" and "Arasta" make the province colorful bring back the ancient times. Several bridges exist which have stood for centuries, adorning the land with their old but fine appearances.

Ipsala, is a district center of Edirne province and it is Turkey's second important border gate, on the European frontier. It is a wildfowl paradise enjoyed by both Turkish and foreign sportsmen.

A specialty of Edirne is as a center for grease-wrestling, which is the national sport of Turkey. Lively championships are held here every July, on Kirkpinar island, a forested area between the Meric and Tunca rivers. These traditional occasions comprise many entertaining activity, and the province is filled with spectators.

Formerly ADRIANOPLE, or HADRIANOPLE, city, extreme western Turkey. It lies at the junction of the Tunca and Maritsa (Turkish: Meriç) rivers near the borders of Greece and Bulgaria. The largest and oldest part of the town occupies a meander of the Tunca around the ruins of an ancient citadel. Edirne's site and turbulent history were determined by its strategic position on the main route from Asia Minor to the Balkans.

Originally called Uskudama and probably first settled by Thracian tribes, the town was rebuilt and enlarged in about AD 125

by the Roman emperor Hadrian, who renamed it Hadrianopolis. In 378 the city was the site of the Battle of Adrianople, in which the Goths dealt Rome a crushing defeat. Besieged by the Avars in 586, the city was captured by the Bulgars in the 10th century and was ransacked twice by crusaders until it fell to the Ottomans in 1362. It then served as the forward base for Ottoman expansion into Europe. It served as the capital of the Ottoman Empire from 1413 until 1458 and flourished as an administrative, commercial, and cultural centre. Its decline came with foreign occupations and devastation in wars. Occupied by the Russians in 1829 and 1878, it was taken by the Bulgarians during the First Balkan War in 1913. Retaken by the Turks that same year, it was captured by the Greeks in 1920 during the Turkish War of Independence and was finally restored to Turkey in 1922.

The centre of the city has several beautiful mosques. The Selimiye Cami (Mosque of Selim) is a masterpiece of the celebrated Ottoman court architect Sinan. Built between 1569 and 1575, the mosque lies on the summit of rising ground and dominates the skyline. The mosque's main structure comprises a succession of 18 small domes dominated by a huge central dome resting on 8 columns with 3-balconied minarets on 4 sides. The mosque forms an architectural whole, with adjacent complementary buildings, school, library, and theological college, now housing archaeological and ethnographic museums. The Bayezid Cami (Mosque of Bayezid), built by Sultan Bayezid II in 1488, has a great dome supported by four walls and an elegant marble niche pointing toward Mecca. Bedesten is a restored 15th-century covered bazaar.