Ishak Pasa Saray, constructions started in 1685 and were completed in 1784.  it's one of the most

beautiful places in the whole of TurkeyDo not miss the spectacular site of The Ishak Pasha palace, only 6 km from Dogubayazit. Ishak Pasha, Ottoman governor of the province, constructed the palace in the 17th-century in a mixture of architectural styles. Nearby you can see a bas-relief of an Urartian king, and a rock tomb from the ninth century B.C.  Near Dogubeyazit, Turkey'smost scenic natural monument, Mount  Agri rises to a height of 5137 meters. To see the place where it is thought that Noah's Ark came aground, go to Uzengili village, 25 km east of Dogubeyazit. Be sure to try the local dessert asure (Noah's pudding), believed to have first been made by Noah's wife from the last bits of food in the Ark. 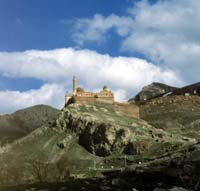