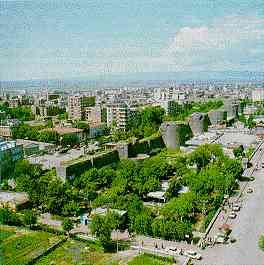 Situated on the banks of Tigris (Dicle), Diyarbakir still carries a medieval air with its walls encircling the city.

These black basalt walls are perfect examples of the military architecture of the Middle Ages. They are also very well known since they are the second largest (5.5 kms) and bestpreserved walls in the world after the famous Great Wall of China. Although there were Roman, and probably earlier walls here, the present walls date back to early Byzantine times. There are sixteen keeps and five gates, each of which deserves seeing along with their inscriptions and relief. There are four main gates along the wall called as Dag Kapi, Urfa Kapi, Mardin Kapi and Yeni Kapi.

You will have the chance to go back to bygone days at the Deliler Han by the Mardin Kapi of the City Walls. Now it is restored as a hotel preserving the original air of the old days when caravan travelers used to stop and rest.

Another fascinating sight in the city center, is the Ulu Mosque, notable for its original architecture and the ancient materials used in the restoration of the building at various times. Nearby the Ulu Mosque is the Mesudiye Medresse and Hasan Pasha Ham, a caravanserai now being used by carpet and souvenir shops. The Nebii Mosque is a typical example of the Ottoman style. The Church of the Virgin Mary is interesting and it is still in use.

The Kasim Padisah Mosque is also interesting, especially due to the engineering which built a large tower upon four tiny pillars about two meters high, called the Dort Ayakil Minare.

The location of noted mythological cave Eshab-ul Keyf, and Dacianus ruins are in the town of Lice. The holy Mount Zulkufil and Hilar Caves are in the town of Ergani. Within the environs of Diyarbakir are the Birkleyn and Hasun Caves, the Antak City ruins and the Cayonu Archaeological Site.

The city holds many mosques and buildings of long historical and archaeological importance. There are four museums in the city center. When you add to those the renowned watermelons of about 40 kilograms approximately, and its silver and copper artifacts Diyarbakir certainly stands as a destination to be visited. Gazi Kosku is a nice place for picnicking.

The town of Cermik is a spa center.

Also spelled DIYARBEKIR, historically AMIDA, city, southeastern Turkey, on the right bank of the Tigris River. The name means "district (diyar) of the Bakr people." Amida, an ancient town predating Roman colonization in the 3rd century AD, was enlarged and strengthened under the Roman emperor Constantius II, who also erected new walls around the city (349). After a long siege, it fell to the king of Persia in 359. It changed hands frequently in the later wars between the Romans and the Persians and was in Byzantine hands when the Arabs took it (c. 639). With the weakening of 'Abbasid control over the region and the emergence of the Hamdanid dynasty of Mosul (in Iraq) in the 10th century, Amida was ruled by various Arab, Turkish, Mongol, and Persian dynasties until its capture by the Ottoman sultan in 1516. Capital of a large and important province under the Ottomans, it regained its prosperity. Its location, near the Persian frontier, also gave it strategic importance, and the town was used as a base for armies facing Persia.

The old town is still surrounded by the ancient black basalt walls that gave it the name Kara (Turkish: "Black") Amid. The triple walls, an outstanding example of Middle Eastern medieval military art, were greatly expanded and restored during the Arab and Turkish periods; they are about 3 miles (5 km) long and have numerous towers. Industries include woolen and cotton textiles and copper products; it long has been famous for its gold and silver filigree work. Tigris University in Diyarbakir was founded in 1966 as a branch of Ankara University and acquired independent status in 1973. Diyarbakir is linked by air and railroad with Ankara, and the region has a well-developed road network.

The surrounding region is part of upper Mesopotamia, comprising a large depression crossed by the Tigris River. It is separated from eastern Anatolia by the Taurus Mountains in the north and from the Mesopotamian plain by the Mardin hills in the south; the Karaca Mountain lies to the west. Agricultural products include cereals, cotton, tobacco, and fruits, notably watermelons; mineral deposits include copper and some coal and petroleum. A large proportion of the population is Kurdish. Pop. (1990) 381,144.