Besni: Besni is roughly 25 miles from Adıyaman and has an area of roughly 600 square

miles. Based on the 1990 census the district has a population of 88,531 with 26,076 living in the central city of Besni. Besni has been called by different names throughout its history. During the Assyrian period it was called Bathesna (pretty), during the Emevi period Hasen, also meaning pretty in Arabic. The name Besni is driven from about 1350 when the town was called Bisni, a word that means “exceptional place” in Arabic.

Besni is one of the oldest settlements in southeastern Anatolia. The earliest settlers of the area were Hittites. The area was subsequently under various kingdoms including Babylonian, Urartu, Kummuhian, Assyrian, Kommagenean, Roman and Sassanian. In 7th century Besni adopted Islam and was ruled by Islamic kingdoms, including Abbasid Caliphate, Seljuk and Ottoman Turks. After the establishment of the Turkish Republic, Besni became a subdivision of Gaziantep province. In 1954 when Adiyaman itself became a province, Besni became a part of Adiyaman.

The most important economic activity of the region is the cultivation of vineyards and pistachio nuts. Besni grapes are known nationwide. Tourism is also an important activity as Besni hosts several important fortresses. The biggest of these, called Bozmekan Kalesi by the locals, dates to around 6th century and is famous for its several wonderfully preserved towers. The city is also home to many old mosques as well as to Çermik spa reputed for its therapeutic powers for ailments like arthritis and skin diseases.

Besni Fortress:  The fortress was built in the city of Eski Besni (old Besni) on a very high inaccessible mountain three sides of which are sheer rock.  Access was from one side only and thus easily defended. Parts of the wall are still standing and the catapults used can be seen.  The castle has also been called Aslanagzi, Guvercin, Goksu, Keklik Goksu and Bozmekan.  The fortress was originally built by the Hittites and has inscriptions from Memluk times.

Degirmen Cayi (Sugozu): About 10 km to the south of Besni near the headwaters of the Sofraz Stream  is Degirmen Cayi.  The scenery is beautiful, green and in contrast are the sharp rocks in which are natural caves where primitive man once lived.  These caves are all along the river and are given names by the local people according to what they look like.

Old Besni Remains:  The fortress of Besni is located 4-5 km to the south of the more recent site and present city of Besni, The city used to surround the castle.  Important remains today are some mosques, a minaret, a bath, a fountain and a bridge.

Dikilitas (SESONK): Dikilitas built on Kizildag in the village of  Zormagara, Besni district. It is 5-6 m. high tumulus which is made of rough stone.  Today, most of the double columns are surrounding Sesonk.  A tumulus lies on Kizildag mountain near Asagihozgisi village 33  kilometers southeast of Besni.  This tumulus, called Dikilitas or Sesonk (three stones) is thought to date to the Kingdom of Kommagene (69 B.C. 72 A.D.) It is possible that it contains the burial of a king or member of a royal family.  6 columns in all surround the 20 meter high tumulus.  These, each made of superimposed drum sections of great size, lie paired to the mound's  northeast, northwest and south.  The form of these columns found at the Karakus tumulus, the Goksu bridge over the Goksu River, and the Cendere bridge over the Kahta River.  Each column consists of 8 drum sections, about 1.5 meters in diameter and one meter high, placed one atone the next.  Each column rises to a height of between 15-20 meters.  The view form the top of the tumulus stretches to a great distance.  In addition, another interesting feature of this site, is a large well sunk 7 to 8 meters  straight into the rock.  This well, resembling the entrance to a cave or cistern, was thought to pertain to the tumulus itself.  The easiest method of attaining access to this site by motoring to the village of Coplu in the district of Yenikoy, and thereupon by foot.

Goksu Bridge (Kizilin Bridge): This bridge is between two villages Gumuskaya and Again in the district of Besni.  Goksu

bridge was built by the Romans and it looks like Cendere Bridge.  This bridge from Roman times is on the Goksu River Kizilin, southeast of Besni.  It is more interesting than the Cendere bridge even though they are similar.  The middle section of the bridge is in ruins but other parts are complete.  The bridge has three arches the middle section having a 20-30 meter span between the two columns.  An inscription on the bridge to how great and magnificent Samsat once was.

Goksu Caves: All along the Goksu river Are interesting caves at a height of 40-50 meters some of which are 7-8 stores. Some caves ware used as graves also most of the caves in the Adiyaman side of the river are near Gumuskaya and on the Besni side are near Kizilin, Sarakaya and Malpinari.

Dolmen: These interesting monuments lie on a hill north of Dikilitas (Sesonk) which is near Asagihozgisi Village, and are Neolithic graves of the Dolmen or Monolith type.  They are constructed of 2 large square rocks leaning against one another.

Sofraz Ruins of Kul Sehri:  The ancient city of Kul Sehri is 15 km to the southeast of Besni located in and around the village of Alisar.  This village has important ruins and of historical value are two mosques, Hasan Pasa mosque, Ulu Mosque and a minaret, Oksuz.  In the ruins of Kul Sehir bottles filled with chloral earth have been found, the secret of which has not yet been solved. 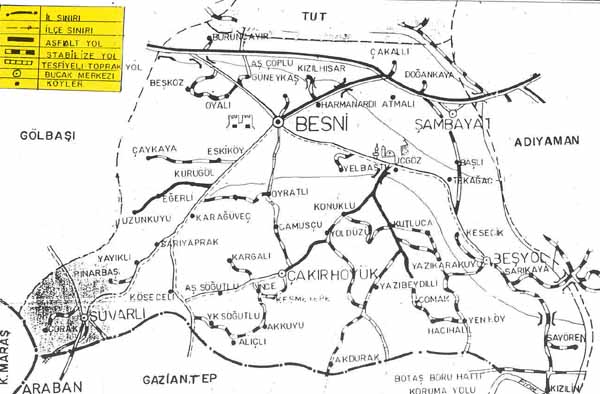 Pictures from Besni and its environment..!