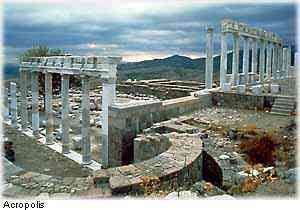 Town, Izmir vilayet (province), western Turkey, 50 miles (80 km) north of the city of Izmir (Smyrna). It shares the site of ancient Pergamum (q.v.), of which there are extensive ruins remaining. The modern town lies over the remains of the Roman city, while the remains of the ancient Greek city with its acropolis lie northeast across the Bergama

River, on a high hill with terraced slopes. Greek ruins also lie on the western outskirts. The Archaeological Museum in town contains a large collection of artifacts from the area, ranging in age from Paleolithic to Byzantine. The town has cotton and leather industries, and in the surrounding area there is farming in cotton, tobacco, and grapevines. Pop. (1990) 42,554.

any of several types of village floor coverings handwoven in the vicinity of Bergama, western Turkey, or

brought there for market from the interior of the country. Although most Bergama carpets date from the 19th and 20th centuries, rare examples survive from the 17th century.

The bold patterns, usually in red, blue, and white, are highly varied. Several designs, showing rows of panels or centralized medallion designs, preserve the fashions of much earlier centuries. Large central diamond designs, for example, are derived from a wreath motif seen in Ottoman court prayer rugs of the 17th century. The format of Bergama carpets is usually more nearly square than in other Turkish types, and the few known prayer rugs tend to be unusually small. An erosive red-dye process sometimes causes the pile to look as if it had been cut in relief.

Pergammon, it was revealed by German archaelogists during excavations made after 1865 in Pergammon and the remains were 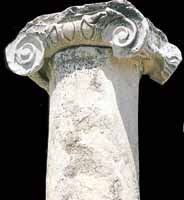 sent to Berlin. It was restored in the Berlin State Museum and was opened to exhibition in  1871. After that date, the museum acquired the name Pergammon Museum.

Bust of Alexander the Great
This marble bust 42 cm in height was found during the excavations at Pergammon and dates back to 3rd century B.C. of the original busts of Alexander the Great made during his lifetime, none have reached us todaay, we have only found reproductions. The bust found in Pergammon is famous, it being more realistic than the one in Louvre-Paris. (İstanbul Archaeological Museum)