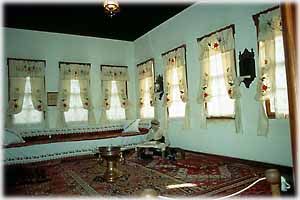 Amasya is one of the provinces which is distinct both with its natural setup and historical values it holds. It was the homeland of the famous geographer Strabo. Located in a narrow cleft of the Yesilirmak (Iris) river, it has a past of 3000 years during which many civilizations left priceless remains of their times. The ruins of the citadel on the rock face of the cleft shelters 2000 year old water-channels, 1000 year old bridges, a mental hospital, an Ottoman Palace and a secret underground passageway. On the rock faces there are impressive rock tombs of the Pontus kings, which contribute very much to the attractiveness of the city. At night, when they are illuminated, the view is unforgettable. The city also has many historically and architecturally precious buildings; the Ferhat water channel, the 13th-century Seljuk Burmali Mosque, the 15th-century Yildirim Beyazit Mosque and Complex; the 14th-century Ilhanli Bimarhane Mental Hospital with lovely reliefs around its portal, the extraordinary octagonal Kapi Aga Medrese, the Torumtay Mousoleum and the Gok Medrese. There are traditional Turkish mansions which have been well-preserved. The 19th-century Hazeranlar Mansion has been restored perfectly and now it is of great interest with an art gallery on its first floor and an ethnographical museum on the second. The Archaeological Museum of Amasya has an interesting collection including the mummies of the Ilhanli rulers of Amasya.

As for natural beauty, Amasya is set apart from the rest of Anatolia in its tight mountain valley and hides its own secret beauty. Lake Borabay (65 kms northeast of Amasya) is a crater lake with an amazing view and fresh air. It is a perfect area for fishing (especially trout), for picnicking and for being alone with nature. Yedikir Dam Lake and Omarca National Park are other excursion sites.Terzikoy spa center, a thermal resort, is also worth a visit.

Historically AMASEIA, or AMASIA, city, capital of Amasya il (province), northern Turkey, on the Yesil River, also called the Iris River. Capital of the kings of Pontus until about 183 BC, it was made a free city and the administrative center of a large territory by Pompey in 65 BC. In the 2nd century AD, it received the titles "metropolis" and "first city" under the Romans. It was the capital of the Turkmen Danismend emirs until annexed by the Seljuk ruler Kilic Arslan a century later. It became a major center of learning in Anatolia after being incorporated into the Ottoman Empire by Sultan Bayezid I (reigned 1389-1402).

Beautifully situated in a narrow gorge with renowned orchards, it was much favored by the early Ottomans; crown princes often served as governors. A castle mentioned by the ancient geographer Strabo, who was born there, now lies in ruins on the summit of a rock, though it was restored during Byzantine and Ottoman periods. Notable medieval buildings include several mosques and a library. Old buildings are concentrated on the heavily populated southern side of the river, connected to the north by five bridges. Many monuments were damaged by earthquakes in 1734, 1825, and 1939.

Amasya, between the Black Sea and inner Anatolia, lies at the center of a region of fertile plains crossed by the Yesil, Çekerek, and Tersakan rivers. Regional economic activities include agriculture, mining, textiles, and cement production. Pop. (1985) city, 53,431.

ancient district in northeastern Anatolia adjoining the Black Sea. In the 1st century BC it briefly contested Rome's hegemony in Anatolia. An independent Pontic kingdom with its capital at Amaseia (modern Amasya) was established at the end of the 4th century BC in the wake of Alexander's conquests. Superficially Hellenized, the kingdom retained its Persian social structure, with temple priests and Persianized feudal nobles ruling over a heterogeneous village population. In the 3rd and 2nd centuries BC Pontus gradually asserted itself among the petty Hellenistic states of Anatolia, annexing Sinope (modern Sinop) as its new capital (183 BC). The Pontic kingdom reached its zenith under Mithradates VI Eupator (c. 115-63 BC), whose program of expansion brought him into disastrous conflict with Rome, resulting in the virtual extinction of the Pontic kingdom and its incorporation into the Roman Empire (63-62 BC).

Return too the Map