Situated in the middle of the Cukurova Plain (Cilician Plain), 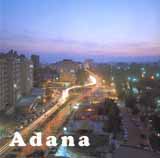 Adana is the fourth largest city of Turkey, nestled in the most fertile agricultural area of the whole country which is fed by the lifegiving waters of River Seyhan.  The city's name originates in mythology, where it was said to have been founded by Adanus, the son of Kronus (God of Weather).  Due to its being in the heart of that fertile center Adana has been an important city for many civilizations for centuries dating back to the Hittites. The precious River Seyhan is spanned by the ancient Taskopru (Stone Bridge) which

was built by Hadrian and then repaired by Justinian. It is worth noting that to built a 300 yards long stone bridge in Roman  times was a real feat.  In the city, the 16thcentury Great Mosque (Ulu Camii), the Yag or Eski Mosque, the Hasan Aga  Mosque, Saat Kulesi (the clock-tower) built in 1882, an old covered bazaar, Bedesten or Arasta are of interest. Also be sure to see the Ethnographical Museum where Turkish carpets, swords, manuscript  books and tombstones are

exhibited. The building itself is interesting as well since it was built as a church by the Crusaders. The Adana Archaeological  Museum merits visiting too. Adana is also famous for its delicious Adana Kebap.  The tea houses and restaurants alongside the Seyhan Dam and Lake provide a cool and perfect view of  the city and the river at sunsets.  Yumurtalik (84 kms from Adana) and Karatas (50 kms from Adana)are the  nearest beaches with proper accommodation. In Yumurtalik there is an ancient harbour castle contributing much to  this pretty fishing city. For fishing, there is Camlik Park 30 kms southwest of Adana.  There are some ancient cities on the road to Iskenderun which include Roman

remnants. Misis is on the caravan route that came from China, India and Persia. Among the remains of Roman times, the most interesting is the  elegant mosaic of the 4th century A.D representing Noah's Ark. Yilanlikale has the ruins  of a fortress set atop a peak dominating  the River Ceyhan. Dilekkaya, the ancient Anavarza, was an important

RomanByzantine city which still preserves the outline of the old city including two particularly worthwhile mosaics.  Karatepe National Park is the neoHittite site where you will find the remains of the summer residence of King Asitawada, tablets of Hittite and Phoenician inscriptions, and an openair museum holding many remnants. Castabala and Toprakkale are the other historical remains. Karsanb Forest, Burucek, Tekir, Horzum, Zorkum meadows are ideal for picnicking and resting.